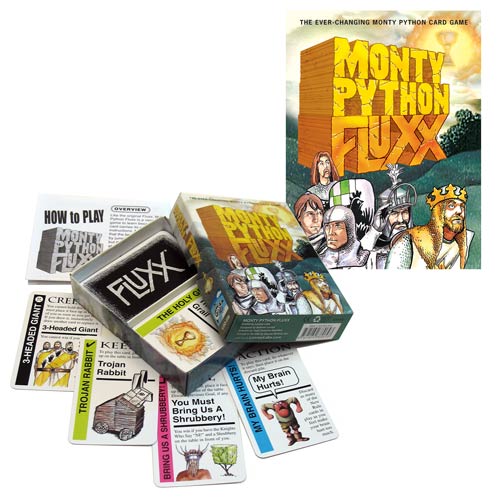 And now for something completely different. The Monty Python Fluxx Game. Fluxx is a crazy card game where the rules keep changing and now it has merged with Monty Python. The idea is to help King Arthur and his Knights find the Holy Grail.

This version has tons of Holy Grail material, and other references from Flying Circus and the movies. This will be a fun game for Monty Python fans everywhere.

In Monty Python Fluxx you will find singing, fake accents, reciting Python dialog for extra cards, and all kinds of crazy stuff. Basically everything a fan wants. It is only $20.99 from Entertainment Earth and $15.72 at Amazon.com.

Whether you’re a knight who says Ni or just a regular knave that enjoys Monty Python, the Monty Python Black Knight with Removable Limbs is sure to be a conversation starter when you place it on the mantle in Castle Anthrax your home. Enjoy a […]

Monty Python fans will enjoy owning a watch based on a Monty Python sketch. The Monty Python Ministry of Silly Walks Watch is perfect for fans of the show and just as silly. Now you can tell time while John Cleese does his silly walk. […]

Looking for the Holy Grail of Monty Python themed toys? Look no further. This Monty Python Killer Rabbit with Big Pointy Teeth Plush Toy is the best. This killer baby rabbit is 5-inches of terror, but he’s plush, so remains cuddly and cute. It’s from […]

And now for something completely different… Fans of Monty Python are going to love this crazy Monty Python-opoly Version 2 Board Game. You get to go on a quest for the Holy Grail. It’s an adventure fit for as little as 2 or as many […]

If you’re a Monty Python fan and you enjoyed the Black Knight with Removable Limbs and the Killer Rabbit Plush, you might want to get your hands on the Monty Python Black Knight Plush Backpack before they’re gone. Measuring 14″ x 22″ x 4″ and […]

The Batman Fluxx Game is the perfect game for Batman fans who want to play a game featuring the Caped Crusader and his sidekick Robin. The game is always evolving with rules that change from different action and goal cards that are drawn at every […]