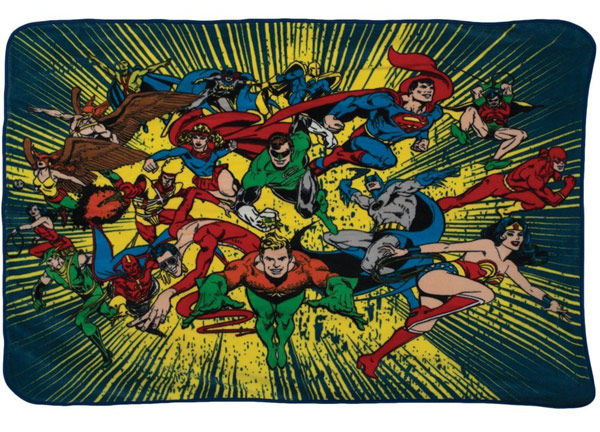 Let the DC Comics heroes of the classic JLA keep you warm with the Justice League of America Burst Fleece Blanket.

Measuring 60-inches tall by 50-inches wide, this super-team will have you covered when you’re feeling a little chilly or just want to snuggle with some old friends from the comic books of yesteryear.

The blanket has plenty of familiar faces but a few might look a little different from what today’s comic book readers are used to. Superman is still wearing his undies on the outside, Supergirl looks like she’s ready for a super workout with her red headband, and Green Arrow is sporting his early Robin Hood look.

The Justice League of America Burst Fleece Blanket will be available March 2014 but it can be pre-ordered now for $19.99 at Entertainment Earth. Also at Amazon.com.

The DC Universe is changing (again) but you can still hold on tight to the New 52 with the JLA Power Burst T-Shirt. Superman, Batman, Wonder Woman, Green Lantern, and a trident-wielding Aquaman come together as the Justice League of America on this 100% cotton […]

There’s nothing better than lounging around the house dressed like a superhero and if you absolutely have to do it, you might as well be Superman. This Superman Snuggie Fleece Blanket with Sleeves makes it easy. It’s made of Polyester Fleece and will keep you […]

When facing your own dark night, warm up with this good looking Batman Fleece Blanket and let the Dark Knight keep you safe as if he is sheltering you in his cape. This Batman fleece blanket features Jim Lee’s artwork and when you aren’t using […]

Zombies are a plague that is hard to deal with. Good thing you don’t see too many animal zombies. That would be worse. This Walking Dead Fish Tank Fleece Blanket shows you what it would be like to have your fish turn into human head […]

Batman fans probably already have the Batman Snuggie Blanket, but I bet you don’t have a Harley Quinn Fleece Blanket. This blanket features the Joker’s insane sidekick and it will warm your heart just like she does with the Joker. This 100% polyester Harley Quinn […]