Star Wars meets Guardians of the Galaxy with the First Shot T-Shirt, featuring the wild, ill-tempered character that really leaves no question about who shot first.

A long time ago, in a galaxy far, far away, within the smoky interior of a bar in Mos Eisley, Han Solo shot first when Guido the bounty hunter confronted him. Later, that classic scene was digitally altered to make it look like Guido shot first. It looked like the editing was done by a newborn, and the change infuriated many fans. Han isn’t a shiny knight with impeccable morals. He made his living as a smuggler before he became a hero. Of course he shot first when his neck was on the line.

With Guardians of the Galaxy, none of the characters fit the traditional hero mold, but Rocket Raccoon is as far from that mold as any living creature could possibly get. I can easily see Han and Rocket becoming fast friends, and I have no problem with picturing Rocket shooting first when somebody gets in his face. 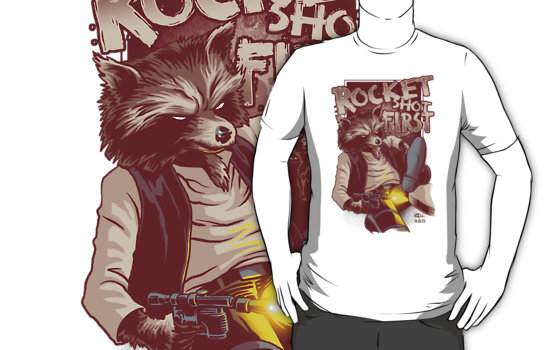 The First Shot T-Shirt is available for $22.40 at RedBubble.

If you’re no good at beer pong, quarters, or chandeliers, you need a drinking game that doesn’t require any skill. With the Spin-the-Shot Drinking Game, things couldn’t be simpler. Just fill the shot glass, give it a spin, and whoever it points to has to […]