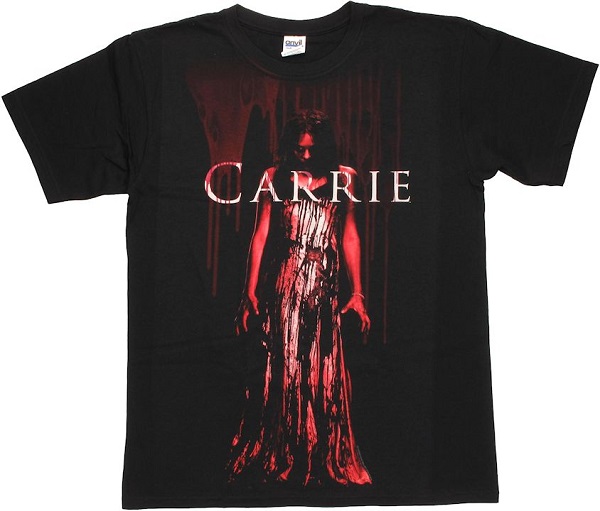 Are you looking for a shirt that a sweet, fun-loving girl on it? Then I’m afraid I got nothing for you but the Carrie Dripping Blood T-Shirt will be reaching out and grabbing you by the throat if you’re looking for a girl that really loves the color red.

When the movie adaptation of Stephen King’s “Carrie” first hit the big screen in 1976, we saw in graphic detail why bullying the shy, mousey girls might not be the greatest idea, and that lesson is being taught again as Carrie once again prepares to unleash a psychic tantrum in theaters.

I can’t really tell if this Carrie is Chloe Grace Moritz, the actress that will portray Carrie on the big screen, but it’s definitely not Sissy Spacek, and I guess it really doesn’t matter because it’s easy to see one thing about the t-shirt version of Carrie – she’s ticked off… and a ticked off girl with out-of-this-world mental powers probably isn’t a good thing.

Fans of Stephen King and horror in general will be dying (hopefully not literally) to add this 100% cotton, screen-printed shirt to their wardrobe.

The Carrie Pop! Vinyl Figure wants to go to the prom with you, but please leave the buckets of pig blood at home. Carrie’s not a fan of pig blood. Based on the character created by Stephen King that appeared in two movies (1976 and […]

This Adventure Time BMO Ticked 16 oz. Travel Mug really expresses how most of us feel before we have had our morning coffee. It depicts a very ticked off BMO and you can certainly identify with the little guy before you have had your first […]

Warning: this Blood Bath Mat is not for the faint-hearted and it’s definitely not for those who still live with their parents or grandparents! I mean, nobody wants to give them a heart attack or something. Especially if you’ve also got the Blood Bath Shower […]