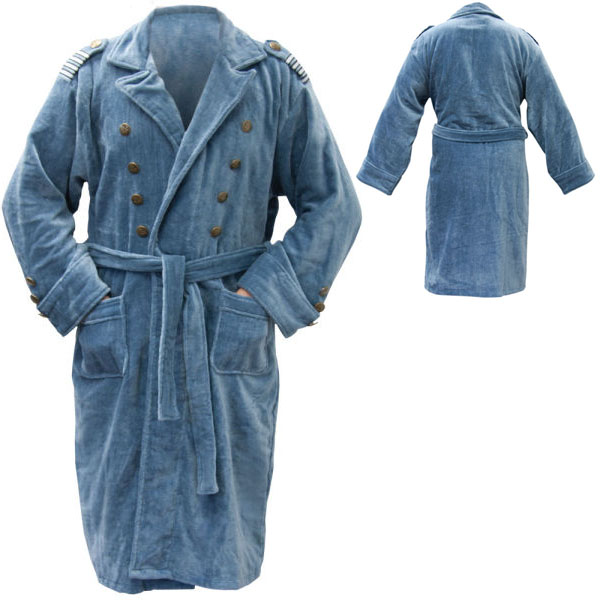 The bathrobe, which probably won’t make you immortal or give you the clout to lead a group of alien hunters, is designed to resemble Captain Jack’s greatcoat with metal buttons and shoulder epaulettes. It’s made from 100% terry cloth, includes a cotton belt, and has two front pockets that let you easily store snacks and your Sonic Screwdriver Programmable TV Remote.

He has the hair. He has the coat. If he could walk, he’d probably have the swagger. You almost expect the Doctor Who Jack Harkness Pop! Vinyl Figure to look at you, flash that devil-may-care smile, and say, “Captain Jack Harkness. And who are you?” […]

Evel Knievel may not be as popular among geeks as Superman, Darth Vader, or Captain Kirk, but you have to admit this Evel Knievel Bathrobe sure looks awesome. While a lot of us may only be as good at stunts as self-proclaimed stuntman Rod Kimble […]

GeekAlerts has shown you some pretty cool bathrobes this past year, Doctor Who TARDIS, Star Wars Stormtrooper, Star Wars Sith and Jedi Bathrobes and the Batman Fleece Robe are just a few of them…But I think I found a bathrobe that will give even the […]

A few weeks ago GeekAlerts showed you the Doctor Who TARDIS Bathrobe and you’ve seen the Star Trek Bathrobes as well, but now we have another bathrobe that will have fellow pool goers in awe. Lose the bowtie and throw on the officially licensed Doctor […]

Previously there were Star Trek Bathrobes and Darth Vader Bathrobes that may have been a bit too geeky for some people. Dialing down the geekiness and boosting up the coolness, these new Superman, Batman and Rocky Balboa Bathrobes are out there for all us superhero […]

Two captains collide with the Captain Jack’s Original Hypervodka T-Shirt, featuring the popular Doctor Who and Torchwood character in a pose that might make many think of Captain Morgan. Hypervodka is the drink that will get you drunk faster than the speed of light. How […]