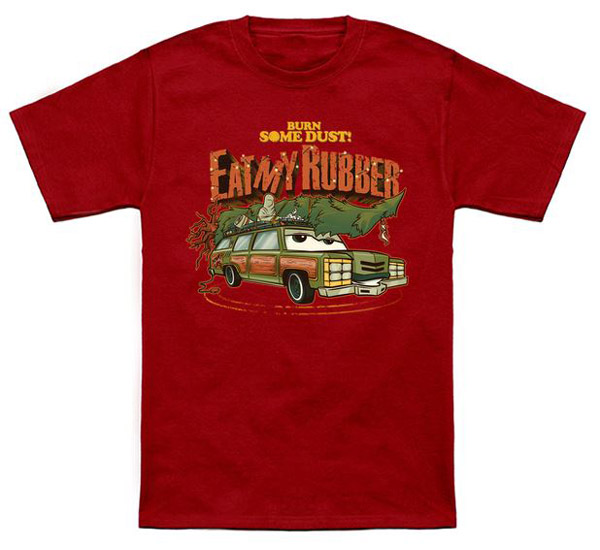 The iconic Family Truckster from National Lampoon’s Vacation enters the world of Cars on the Burn Some Dust T-Shirt.

Clark Griswold and his family always seem to have really bad luck when they decide to take vacations, but the poor car from the first film had the worst luck of all. Not only did poor Truckster have to deal with Clark’s driving, but he also became an unwilling accomplice in moving a body (RIP Aunt Edna) and was even forced to commit murder (RIP Dinky). The road-weary warrior wasn’t around for Christmas Vacation but that popular film also gets a shout-out with the super-sized Christmas tree on top, complete with that chaos-causing squirrel dangling from the branches.

Artist PoopSmoothie has mashed-up Cars with Batman and Ghostbusters, and now he offers that same unique style for fans of the cult classic Vacation films. 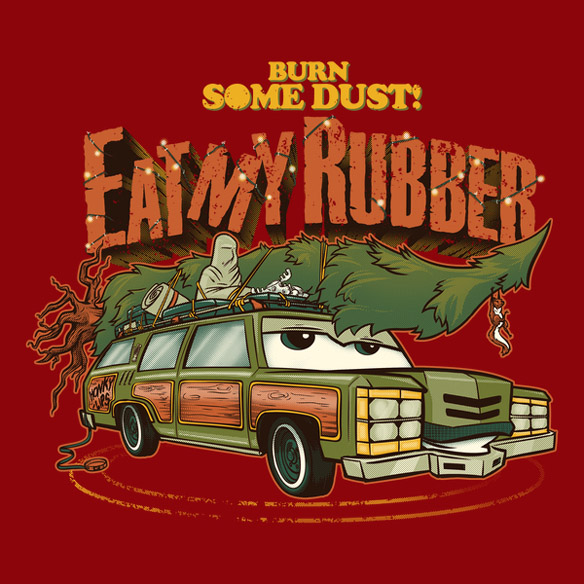 The Burn Some Dust T-Shirt is available for $19.95 at NeatoShop.

Some men just want to watch the world burn, while others are just looking for a few laughs. The Joker Watch the World Burn T-Shirt reveals the one man who wants to do both. Alfred shared some great wisdom in “The Dark Knight” when he […]

You can’t hang this fire extinguisher on the wall or use it to get a permit or something for your office or building. But what you can do with this Dust Extinguisher Mini Desktop Vacuum is keep your desk tidy and free of dust and […]

You are going to look great with these Star Wars Yoda Dangling Lightsaber Earrings dangling from your ears. These rebel logo stud earrings have backs that feature a dangling lightsaber charm. That means you get two different looks from a single pair of earrings. A […]

Hey GeekAlert fans, are you looking to add some excitement to your Thursday night TV lineup? Sure you have the Big Bang Theory, but come 10/9c you have a chance to watch something that would make even Sheldon excited; if he wasn’t Sheldon of course. […]

If your full-figured, triangular Christmas tree were to go on a diet, it might look like this Fashionista Christmas Tree.

These Star Wars Darth Vader Dangling Lightsaber Earrings are a great gift for the Sith lady in your life. You get Imperial Crest stud earrings with backs that feature a dangling lightsaber charm and rubber stoppers. So you get two different looks from a single […]

No Christmas tree is complete without a few items that will make your grandma cringe. Add the Giant Christmas Tree Googly Eyes to your tree and give it a look that is photo ready. The eyes measure a whopping seven inches in diameter, so they […]

The official Christmas countdown has now begun! I always begin counting down the days when Christmas is just a hundred days away. Aside from getting a much-deserved break from work, it’s the perfect time of the year to get together with friends and family and […]

Some shoes are made for walking, but the 2-in-1 Creative Colorful Shoes iPhone Stand and Anti-Dust Plug are made to protect your smartphone while simultaneously providing a way for it to stand at attention when you’re not using it. Dust is everywhere and it can […]