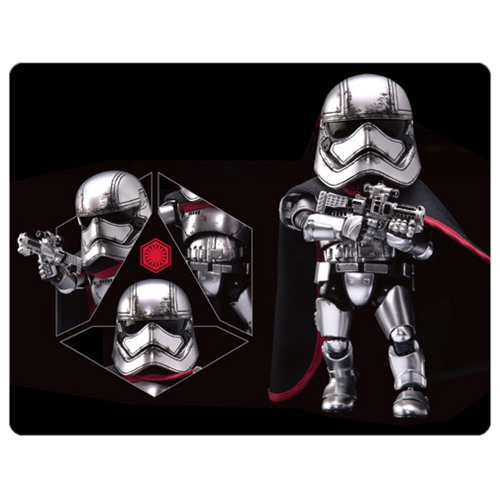 She may not have been worth all of the hype since she was barely in the movie, but now she is back with this Star Wars: The Force Awakens Captain Phasma Egg Attack Action Figure.

This 6-inch action figure is specially made based on Captain Phasma’s character and painted expertly, capturing the character perfectly. She has her silver armor and helmet with weathering effects and also features a finely tailored cape, highly detailed F-11D blaster rifle, and a specially designed figure stand.

$89.99 from Entertainment Earth. Pre-order it now for July.

There’s a lot to love about this Avengers: Age of Ultron Captain America Egg Attack Action Figure. For instance, this 6-inch action figure body has over 30 points of articulation, and 2 interchangeable faces with separate rolling eyeballs. This figure is specially made based on […]

This Star Wars Rogue One Death Trooper Egg Attack Action Figure is based on the movie Rogue One: A Star Wars Story. He has a detachable tactical vest and an exclusive blaster pistol and rifle too. The details of this awesome Star Wars figure are […]

You’ve never seen Sandtroopers like these. The Star Wars Sandtrooper Egg Attack Action Figure has a 6–inch action figure body with over 24 points of articulation. That means you can display the figure in any pose you like. These figures are expertly painted with some […]