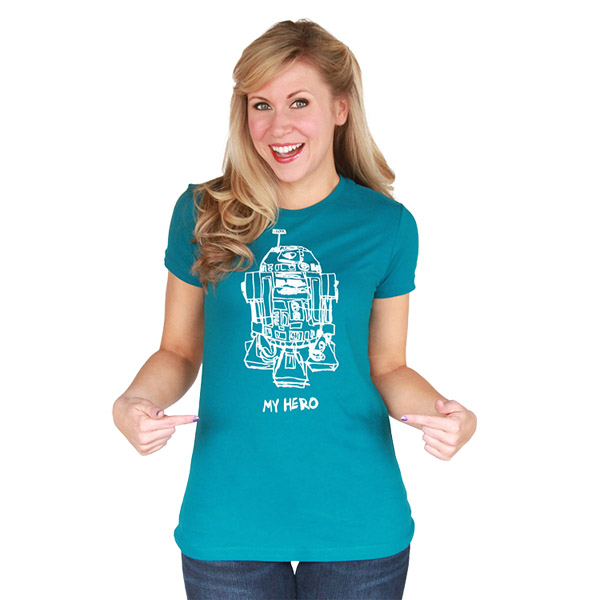 Celebrate the greatest character in the entire Star Wars saga with the Star Wars R2-D2 My Hero T-Shirt.

Forget Jedi and smugglers who fight for what’s right because this tiny droid has them all beat. The lovable R2-D2 (Artoo Detoo) is one of the two characters to have appeared in the previous six Star Wars films, and he was the first character to be confirmed for Episode VII. Also, C-3PO (the other character that’s been in all six movies) had his memory wiped at the end of Episode III so R2 is the only one to actually remember everything. He even remembers Jar-Jar Binks, which isn’t necessarily a good thing.

This 3.7-ounce cotton tee features an artistic line drawing of the iconic character, so the lovable and resourceful astromech droid can be with you always.

R2-D2 is the most famous droid in the galaxy. He’s always busy saving a galaxy far far away or paling around with C-3PO, but now he is at your service, holding something far more precious than Death Star plans. Cookies. This Star Wars R2-D2 Cookie […]

On days when I just can’t make myself leave the apartment to grab some decent grub, I just call the nearest Chinese place for some good old take-out. And while this Take-Out Cookie Jar won’t exactly hold the same Oriental fried rice and chow mein […]

With Star Wars Episode VII on the horizon, it’s very important to bring future generations up the right way, and the Star Wars Episode IV Comes First T-Shirt will make sure you don’t make a fatal mistake that could forever have your children ignoring the […]

Are you looking for a good way to stop the kids from eating all your favorite cookies? How about scaring them with the Zombie Cookie Jar. When this cookie jar isn’t ensuring that nobody touches the cookies, it can double as a perfectly scary Halloween […]

Electronic Butterfly In A Jar

Watching a butterfly in motion is one of natures great pleasures, but putting one in a jar to do it isn’t humane.  Don’t worry, GeekAlerts has you covered with the Electronic Butterfly In A Jar.  Now you can spend hours watching the butterfly movement and […]

Star Wars fans who have gotten tired of the Boba Fett Cookie Jar, can now grab their Darth Vader and Yoda cookies and keep them in a jar shaped like the Death Star.

Star Wars fans have plenty of options when it came to cookie jars, with the choice of Darth Vader, Boba Fett, and Death Star cookie jars. Now Star Trek fans get a cool choice with the Spock Cookie Jar. Made of porcelain, this cookie jar […]