With Rakuten.com coupons and promo codes, you can save money with deals like 10% off, $20 off, or free shipping. The exact deals depend on the current Rakuten promotion codes and online coupons available, but deep discounts and super shopping deals are common. 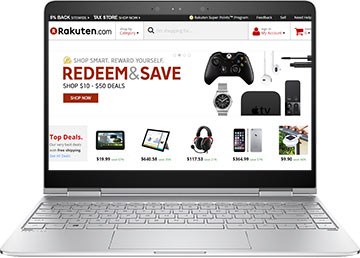 Everyone enjoys shopping with friends; geeks will be glad to see that the experience has extended to the Internet. When you log on to Rakuten (formerly Buy.com), you immediately have the opportunity to shop with your friends via e-mail, IM, or social networking sites such as Facebook. Internet shopping no longer has to be a solo experience, unless you want it to be. Because this online superstore also makes it possible to browse everything from cameras, computers, and cell phones to books, electronics, and movies conveniently and privately from your home.

Originally called Buy.com when it was started in 1997, the name expanded to Rakuten Buy.com after the Japanese company bought it in 2010. Later, they rebranded  as Rakuten.com Shopping, and then eventually dropped the “Shopping” suffix.

Techies love their private gadgets, and no doubt you’ll be pleased by Rakuten.com’s selection of personal electronics. Whether you’re seeking a Garmin nuvi GPS Navigator, a Sony Portable DVD player, a Samsung digital camera, or a portable iPod docking boom box, you’ll find it at a great price on www.rakuten.com. If it’s tools you’re after, hop on over to the Home and Outdoor section for products from Black and Decker, Hamilton Beach, LF, Haier, Bostitch, and Stanley. Where else are you going to save on a Swiss army knife, an ultrasonic laser distance meter measurer, a PlayStation 3, an Xbox 360, an Apple iMac, and the Firefly complete television series on DVD all in one place?

When this company started business in 1997 as Buy.com, its original model involved selling products at below cost and making up the losses through advertising and ancillary services. Although that didn’t quite work out, deal-seeking customers can still find phenomenal savings on the website. This online store has moved well beyond computers and electronics to offer virtually every gadget and tool a geek could want.