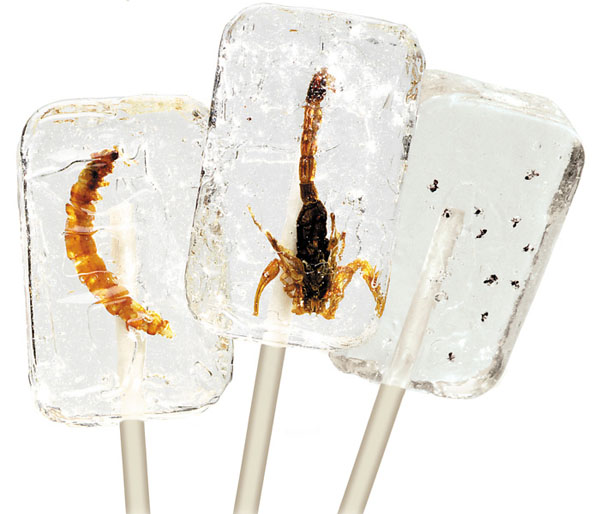 If you enjoy dining on strange and exotic foods, then you probably already given the Lion, Python & Crocodile Meat a try, and possible even the Canned Mopane Worms; but what about dessert? That’s where the Insectilix Lolly will come in handy.

These insect infused lollipops come in three varieties (scorpion, worm, ants) with three unique flavors, Vodkalix, Tequilalix and Antilix. The first two flavors should be pretty obvious since we’ve seen Vodka with a Scorpion before and what’s a worm without Tequila? The Antilix is new to us, but peppermint and farm-bred ants sounds like a good enough combination.

If you’re ready to give the Insectilix Lolly a try, or maybe let an enemy try it instead, you can purchase them at Firebox.com for $8 each or about $20 for a 3-pack. They are also available at Amazon.co.uk.

If you’re like most of us, you like slushies and frozen drink things.  The problem is flavor and messes.  How many times do you wish you could get any flavor you wanted when you wanted it in a nice and easy to eat package?  Problem […]

Lollipop enthusiasts have a new sucker to keep them busy. The Lip Lolly is a laughable and lick-able lolly likened to a ladies lips. Try saying that three times fast. Raise these lips to your own and see what lips on a stick tastes like. […]

Whether you’re preparing for the forthcoming Zombie Apocalypse or just like to try exotic foods, things like the Tactical Canned Bacon, Exotic Wild Animal Meat and Reindeer Pâté all would seem to serve you well. If you feel those aren’t enough to satisfy your wild […]

With a 26″ length, a 5″ circumference, and weighing in at a whopping 3 pounds, these World’s Largest Gummy Worm are 128 times the size of regular gummi worms. They have a 1 year shelf life and a different flavor on each end, so you […]

Ant-Man makes a BIG impression with the Avengers on the You Look Like Ants From Up Here T-Shirt. Okay, Scott Lang might not have the coolest name in the superhero biz because Ant-Man does sound a bit lame when compared to names like Captain America, […]

If you are looking for a lollipop with a sharp edge, look no further than these Chillax Axe Shaped Ice Lollipops. They aren’t really sharp, but they do look like mini axes. Chillax creates 2 axe shaped ice lollies with plastic axe handles. The taste […]

It’s been years since we told you about giant gummy Bears, Pythons, Bunnies, and Worms. Now we present the World’s Largest Sour Gummy Worm. It weighs in at about 3 pounds, or 128 times the size of a normal gummy worm. It has two flavors: […]