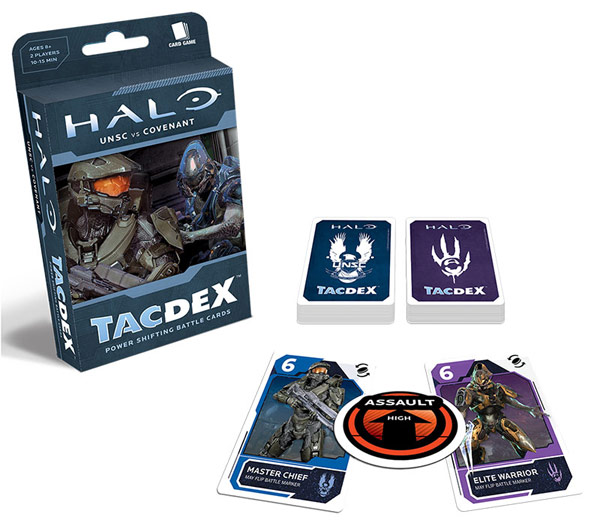 This Halo TacDex Card Game brings all of the excitement of the popular video game franchise to the tabletop. It is the UNSC vs. Covenant. This game was created by game designer Richard Borg, maker of Memoir ’44, Command, and Colors.

This card game is based on the game of War, where two or more players face off to collect the most cards. Players both flip one card and the battle marker reveals whether the high or low card wins. Special cards let players draw extra cards or force opponents to reveal a card. When the End card is revealed, the game ends and the player with the most cards wins.

It’s a new way to play War. This fun game is only $9.99 from Entertainment Earth.

For many Halo fans, teabagging is just as important as a team victory…it may even be more important for some of you 🙂 If you know someone like this, or you’re a proud teabagger, then this Halo Teabaggering T-Shirt is for you. Just when you […]

This Halo 4: The Essential Visual Guide Hardcover Book is well named because it is essential reading for true Halo fans. It features detailed sections about the characters, factions, weapons, vehicles, locations and more. You get 232 pages with annotated artwork that spans the entire […]

Super Mario fans are going to have a lot of fun with this Super Mario TacDex Card Game. It is a light strategy card game with a Super Mario twist. The idea is that each player has a battle deck from which they draw a […]

Get ready for a serious Halo statue in this Halo Master Chief Premium Format Statue. Master Chief comes to life in this limited-edition Master Chief Figure. There are only 750 made. The display base is designed to look like the surface of the Ringed Planet […]

Fans of the Halo franchise of games will want to get their hands on these Halo 4 Action Figures, which look pretty awesome. These 6″ action figures each have at least two dozen moving parts. You can choose from Master Chief, Didact, Elite Ranger, Spartan […]

The Halo Monopoly Game takes Halo off of the screen and puts it on your table. You will join Master Chief on a campaign to gain control of critical locations and legendary assets from the Halo Universe. It is a must have for fans. This […]

Are you looking for a fun and educational way to keep your kids occupied while still letting them enjoy your iPad 2? Crayola Trace & Draw for iPad 2 is a very affordable way to help your kids learn how to draw and express their […]