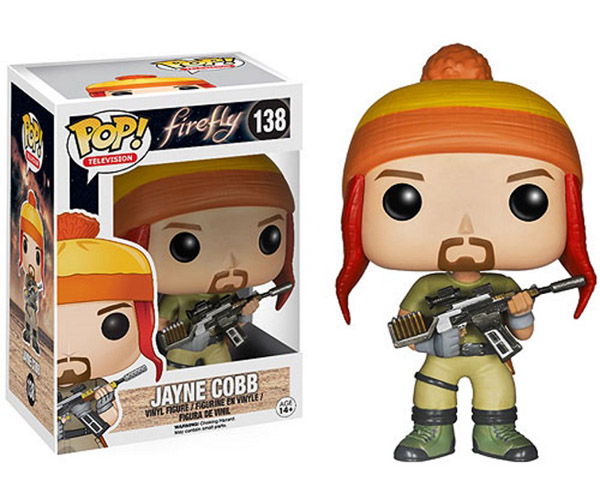 Jayne Cobb, the man who shot a teammate simply because he was offered his own bunk. The Firefly Jayne Cobb Pop! Vinyl Figure lets you bring this temperamental mercenary home, and there’s no reason to worry. Jayne might seem gruff and short-tempered but he’s really… okay, he’s really gruff and short-tempered, but he also wears that ‘eye-catching’ orange hat just because his mom made it for him. You have to love a guy like that.

The 3 3/4-inch-tall figure features Adam Baldwin’s fan favorite character cradling one of his many beloved guns.

Don’t damage your calm by trying to resist this shiny collectible. The Firefly Jayne Cobb Pop! Vinyl Figure will be available later this month but it can be pre-ordered now for $9.99 at Entertainment Earth.

When it comes to the world of Firefly and Serenity, Captain Mal might have been the picture of cool but Jayne was the perfect image of attitude, and he pulled that attitude off while wearing an awesome hat. The Firefly Keep Calm and Bring Grenades […]

You won’t have to worry about your calm being damaged when you’re wearing the Firefly Jayne Rainmaker Shirt, but you might have people mistake you for the hero of Canton. This 100% Polyester ClimaCool Mesh shirt (the same material used by the National Basketball League) […]

People will know your teddy bear isn’t afraid of anything when they see the hat the Firefly Jayne Plush Bear is wearing. Dressed in cargo pants, a Troublemaker t-shirt, and the eye-catching hat knitted by Ma Cobb, this plush version of Jayne, standing just a […]

Many loyal Browncoats already have a wardrobe that includes this iconic headpiece, but those who don’t need to grab up Jayne’s Firefly Hat because the beloved symbol of devotion is about to become a lot harder to find. The multi-orange, 100% acrylic yarn, machine-washable laplander […]

Firefly fans can wear their fandom on their feet with these Firefly Socks. This is Firefly for both sexes and fits women’s shoe sizes 6 1/2 to men’s size 12. You can choose from Jayne’s Hat or Blue Sun design. These are officially-licensed Firefly merchandise, […]

You’ll feel like a big dang hero when you have the Firefly Baby Vera Plush by your side. Yeah, I know the quote’s not quite right but you did read the ‘baby’ part, right? No swearing allowed. Jayne Cobb loves Vera and now you can […]

Having the latest smartphone like the Samsung SIII and iPhone 5 means you appreciate style, class and function. And you don’t want some big bulky case messing that up. But you still need some protection; after all, you did spend a decent chunk of change […]