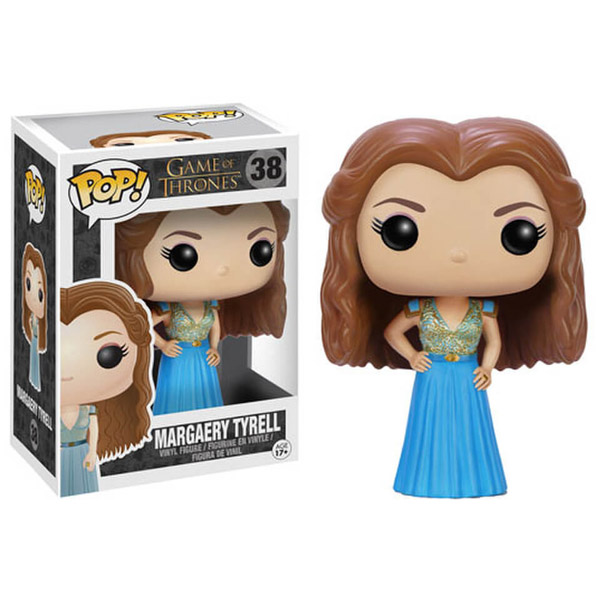 In the world created by George R.R. Martin, many are playing the game of thrones, and the Game of Thrones Margaery Tyrell Pop! Vinyl Figure reveals one of those players.

Played by Natalie Dormer on the popular HBO series, Margaery Tyrell is a force to be reckoned with. Determined to be queen one way or another, she has been the wife of King Renly Baratheon, King Joffrey Baratheon, and Joffrey’s younger brother (and successor), Tommen Baratheon. Both Renly and Joffrey are dead so let us bow our heads in silence for a moment and hope for the best for Tommen, who basically just wants to play with his cat at this point in his life.

Standing about 3 3/4-inches tall as a Pop! Vinyl figure, Margaery doesn’t look very intimidating but make no mistake. She’s playing the game of thrones, and she’s playing to win.

The Game of Thrones Margaery Tyrell Pop! Vinyl Figure will be available April 2016 but it can be pre-ordered now for $9.99 at Entertainment Earth.

Joffrey Baratheon has become the character everyone loves to hate because he’s the worst type of spoiled, whiny brat there is – the type with the power to have your head chopped off. The Game of Thrones Joffrey Perfect Target Poster lets you put your […]

This Game of Thrones House Sigils Infinity Scarf features all of the major houses from Game of Thrones. Like Baratheon, Baratheon of Dragonstone, Greyjoy, Lannister, Stark, Targaryen, & Tyrell. You don’t even have to choose a favorite. You can have them all. Game of Thrones […]

Now you can be just like Ser Loras Tyrell with this Game of Thrones Loras Helmet. The Knight of flowers gets all the ladies after all. This wearable helmet comes with two operable visors and the stand is silkscreened wood with the Tyrell sigil. It […]

Which house do you swear allegiance to? These Game of Thrones Sigil Rings have you covered if you choose Baratheon, Stark, or Targaryen. These chunky style rings look good on both men or women. They are available in sizes 7 and 10 and feature the […]

Turn your home into a castle. All it takes are these Game of Thrones Banners. Having a Game of Thrones House banner for your own house makes it feel like you are in Westeros and fighting for the throne. You can choose Baratheon, Bolton, Greyjoy, […]