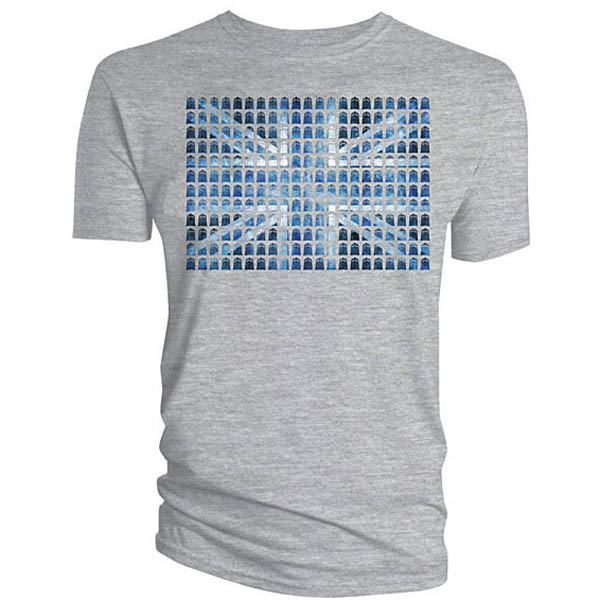 Some people that have never left the United States have an undying love for the UK and it’s all because of a certain madman in a box. The Doctor Who Union Jack TARDIS T-Shirt lets you show some UK pride while revealing your devotion to Doctor Who at the same time in a very clever kind of way.

What at first appears to be a simple Union Jack on a heather-colored T-shirt is actually a collection of TARDIS’ (TARDIS’es? TARDI??) in varying shades of blue to recreate the flag of the United Kingdom.

The Doctor refers to his lovable blue box as Sexy so you’ll get a double-shot of sexiness with the Doctor Who Her Universe TARDIS Union Jack Dress. This patriotic and Whovian mash-up offers an artistic look at both the UK flag and a detailed likeness […]

Even if you’ve never visited the UK, you probably feel a deep and sincere love for the country that brought us the crazy Time Lord that travels in a little blue box, and the Doctor Who Union Jack TARDIS T-Shirt lets you show pride in […]

This TARDIS & Union Jack Antique Key Necklace is the perfect accessory for Doctor Who fans. One side features the TARDIS, the other side has the Union Jack. It is made of 316L surgical stainless steel + leather. Show your love of both Doctor Who […]

Classic & retro T-shirts are a great way to look cool and they make for cheap collectibles.  The Star Wars Good Guys T-Shirt & Babydoll offer fans of Han Solo, Luke Skywalker and Chewbacca and very cool way to honor them.  Men and women alike […]

This Doctor Who TARDIS Union Jack Necklace is the perfect way to celebrate the 50th anniversary of the show. This necklace features not only the TARDIS, but also the Union Jack flag. The pendant measures 1/2″ x 3/4″ and the chain measures 18″ long with […]

This TARDIS Union Jack Skirt lets you show off your Doctor Who love with a Union Jack/TARDIS pattern. It looks super cute and might even attract a timelord or two. It is a great way to work Doctor Who into your less casual attire. It […]

By now, most men and women have already heard of or read the steamy novel “Fifty Shades of Grey.” That’s why it’s currently an opportune time to give the 50 Shades of Gray Book as a gag gift. This spoof on the worldwide bestselling novel gets […]

With X-Men: First Class still in theaters and the summer well underway, now is a great time to get stocked up on cool summer babydoll t-shirts; and none are better than this Mystique Nouveau Babydoll. Raven Darkhölme is a character you wouldn’t want to mess […]

The Ninth Doctor would say the Her Universe Doctor Who Union Jack Cropped Cardigan is fantastic, while the Eleventh Doctor would probably say cropped cardigans are cool, which could be an interesting tongue twister if said fast enough. It doesn’t matter who your favorite Doctor […]