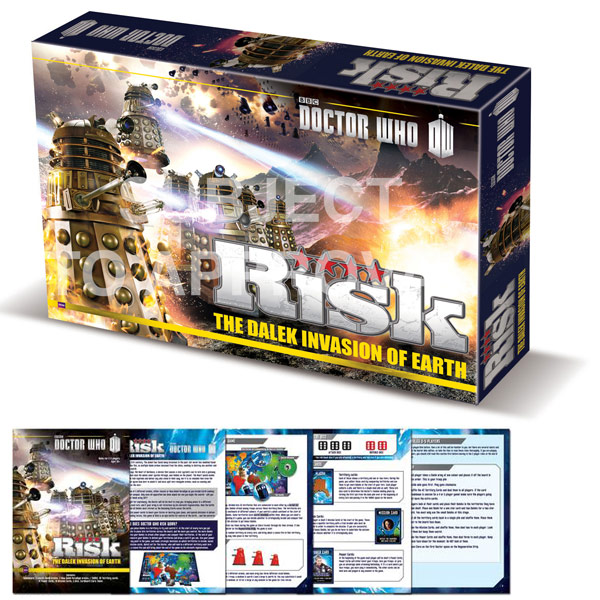 You’ve played regular Risk, now play Doctor Who Risk. The game takes place on Earth in the early 20th century. Dalek armies are descending from the skies, seeking to destroy one another and conquer the world.

But that’s not all. An ancient artifact was hidden on the planet that will enable the Daleks to reign supreme across the universe.

You can play as one of 5 different armies, either classic (Black, Bronze & Silver) or New Dalek Paradigm (Red & Yellow) as you invade Earth seeking the ancient weapon. Exterminate all opposition and you can begin the search. The TARDIS will also sweep around the board to defend Earth! This awesome version of Risk is only £36.99 from Forbidden Planet. Pre-order it now for October.

Whose side are you on? Plants or Zombies? Well, either way you are at war in Plants vs. Zombies Risk. It is Plants vs. Zombie in all-out, suburban dominating war. This game will offer hours of fun for fans of the video game franchise. This […]

This Doctor Who Character Building Dalek Paradigm Set 5-Pack is just what you need to build your Dalek army. It includes 5 Daleks: blue, red, yellow, white, and orange. Now you can recreate the best Dalek scenes with your building blocks. Each Dalek stands about […]

The Doctor Who Monsters – Dalek Collectible Coin commemorates one the most iconic figures in the Doctor Who universe, because everybody knows the Doctor would just be a madman wandering aimlessly through time and space if it weren’t for awesome villains constantly making him be […]