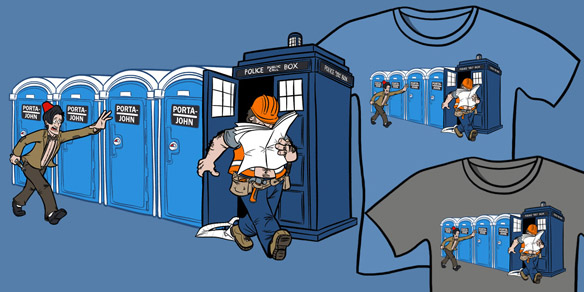 The TARDIS is the most powerful weapon in the universe, which is just one reason why it’s important for the door to always be locked. The Doctor Who Porta John Smith T-Shirt reveals the other reason.

Does the iconic blue police box of Doctor Who look like another familiar blue box we’ve probably all seen around? Not really, but I guess one blue box pretty much looks like another when you gotta go.

Judging from the look on the Doctor’s face, he already has an idea of the horror that awaits within his beloved TARDIS.

The Doctor Who Porta John Smith T-Shirt is available for $19.95 at Sharksplode, the website by Joel Watson and Star Trek: The Next Generation’s Wil Wheaton. (Update: Link removed because the page is gone.)