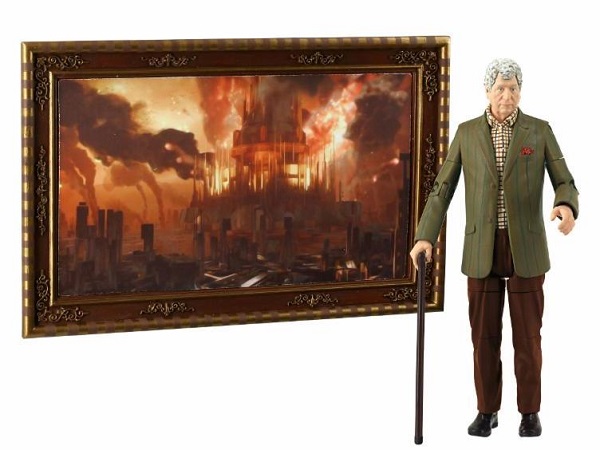 The Fourth Doctor (sort of) returns with the Doctor Who Curator Figure Set, offering a new mystery for Whovians to ponder.

At the end of the Doctor Who 50th Anniversary episode, the Eleventh Doctor comes face-to-face with the mysterious Curator… who happens to bear a striking resemblance to the Doctor’s fourth incarnation. No wonder since Tom Baker played both roles, but did the familiar man with the big nose actually drop a hint about being a Doctor of the future? A Doctor who just happened to revisit an old favorite when it was time to regenerate?

The set includes a 5-inch-tall Curator figure with his walking stick and a Lenticular Gallifrey Falls No More painting.

The Doctor Who Curator Figure Set will be available October 2015 but it can be pre-ordered now for $34.99 at BigBadToyStore.com.

(via The Robot’s Voice)

The Legend of Zelda: Breath of the Wild Lenticular 3D

The Legend of Zelda: Breath of the Wild Lenticular 3D is a limited-edition Legend of Zelda lenticular shadowbox that is going to look amazing on your wall. It comes in a black wooden shadowbox frame, ready for hanging. It is perfect for your game room […]

Ruffles instead of scarves? Did the Doctor wander into the wrong closet? Never fear. The Doctor Who Fourth Doctor Regenerated 5-Inch Action Figure isn’t proof that the Time Lord got lost in his own TARDIS. Instead, it gives you a look at Tom Baker’s Fourth […]

This Star Wars: The Last Jedi 3D Lenticular is a feast for the eyes. It is a lenticular that features Rey, Finn, and Poe as the Millennium Falcon flies overhead. The best part is that the picture moves based on your viewing angle. Hang it […]

We can all use a pick-me-up, and sometimes it’s surprising how the littlest things will turn a frown upside-down. For instance, the Smile and Wink Lenticular Waste Basket features the classic yellow smiley face that winks at you as you walk by. Who knew that […]