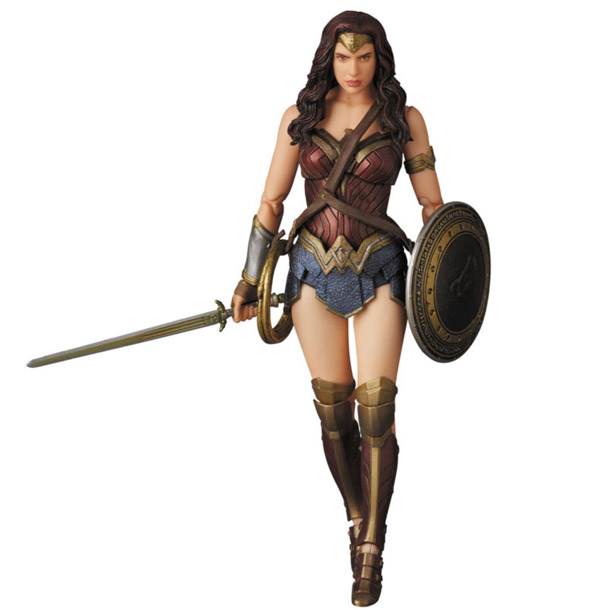 Get ready for justice to dawn with the Batman v Superman Dawn of Justice Wonder Woman MAF Action Figure as the Amazon princess prepares to battle Doomsday while the Man of Steel and the Dark Knight have the typical comic book hero-versus-hero-before-becoming-allies fight.

Standing approximately 6-inches tall and based on Gal Gadot’s portrayal of the DC Comics heroine, Wonder Woman is ready to face any challenge with her sword, shield, and lasso.

The Batman v Superman Dawn of Justice Wonder Woman MAF Action Figure will be available November 2016 but it can be pre-ordered now for $49.99 at Entertainment Earth.

The Dark Knight gets ready to let justice dawn on the Man of Steel’s face with the Batman v Superman: Dawn of Justice Batman MAF Action Figure. Does Superman bleed? It looks like Batman is ready to find out the answer to that question with […]

This Suicide Squad Harley Quinn Dress Version MAF EX Action Figure is based on Harley as she appeared in the Suicide Squad movie. She stands just over 6-inches tall. Harley is depicted in her glittering gold cocktail dress and is nicely articulated. She even comes […]

Is the Suicide Squad Harley Quinn MAF EX Action Figure the ultimate Harley Quinn figure? I’d have to say yes, and the voices in my head agree with me. After all, check out all the insane goodness you get. Standing a little over 6-inches tall, […]

Just in time to help the Dark Knight and the Man of Steel take on Doomsday comes the Batman v Superman: Dawn of Justice Wonder Woman Rock Candy Vinyl Figure. Standing 5-inches tall and based on the Amazon warrior as she appears in Batman v […]