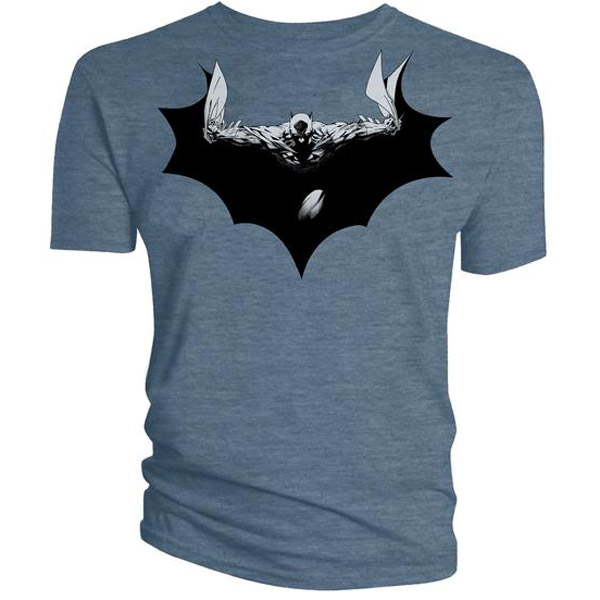 Why settle for a mere bat symbol when you can have the man himself? The Batman Flying Symbol T-Shirt has the Dark Knight working double-duty to create a stunning effect for Bat-fans.

From a distance, it might look like you’re showing your love for Batman by proudly displaying the bat logo on your chest, but upon closer inspection, it’s easy to see that what first appeared to be a simple logo is actually the shadow of Batman’s cape as he leaps through the air straight towards you. It’s an awesome effect that still looks cool even after you realize what the design really is.

You can get the Batman Flying Symbol T-Shirt in blue for £15.99/$25.80 at ForbiddenPlanet.com. If blue isn’t really your thing, you can also get the shirt in grey.

The Dark Knight gets stylish with the Batman Bat Crest Symbol T-Shirt, blending the Bat with Baroque for an eye-catching design. This black, 100% cotton tee features the iconic Batman logo in the midst of ornamental baroque lines and fancy flourishes, which seem a little […]

This Batman Bat Symbol Seam Blazer is looking sharp. It is a black 2-button single-breasted jacket with the bat symbol formed by seams on the back of the jacket. The yellow lining also has your own private Bat symbol. You will be looking as good […]