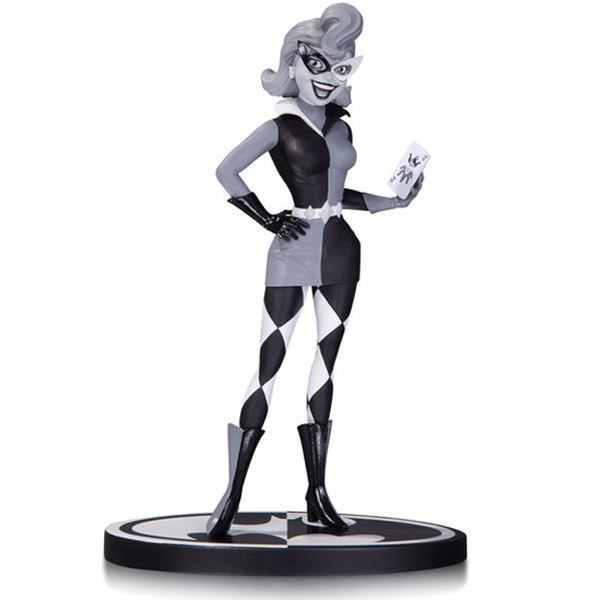 The Batman Black and White Harley Quinn by Paul Dini Statue reveals Harley Quinn the way she was meant to be.

Okay, Harley is actually how she’s meant to be now, but there was a time, a long, long time ago, when the image above represented Joker’s sexy and maniacal sidekick. Writer Paul Dini wanted a female character to appear in Batman: The Animated Series as Joker’s assistant. She was only meant to show up in that one episode, so Harley was apparently stubborn even back then. Dini drew a quick sketch to show artist Bruce Timm what he had in mind. Obviously, Timm made a few modifications.

It’s a rare look for a now-classic Batman character, especially if you’re into 60s fashion, because the 60s are strong with this one.

The Batman Black and White Harley Quinn by Paul Dini Statue will be available December 2015 but it can be pre-ordered now for $69.99 at Entertainment Earth.

The Fantasy Figure Gallery DC Comics Collection Black and White Harley Quinn Resin Statue adds just a touch of color to a monochrome scene, but that little splash of red tells quite a story. Based on designs by illustrator Luis Royo and standing 10 1/4-inches […]

How about a black and white psycopath for your shelf? Don’t worry, at least it is a cute psychopath. This Batman Black and White Harley Quinn 2nd Edition Statue is a limited edition statue taken from the designs of Harley’s co-creator, Bruce Timm. This limited […]

Hello nurse! The Batman Arkham Asylum Harley Quinn Red Black and White Statue will have you thinking your medical care isn’t in the greatest of hands. Sure, the woman who now calls herself Harley Quinn is a doctor but do you really want to rely […]