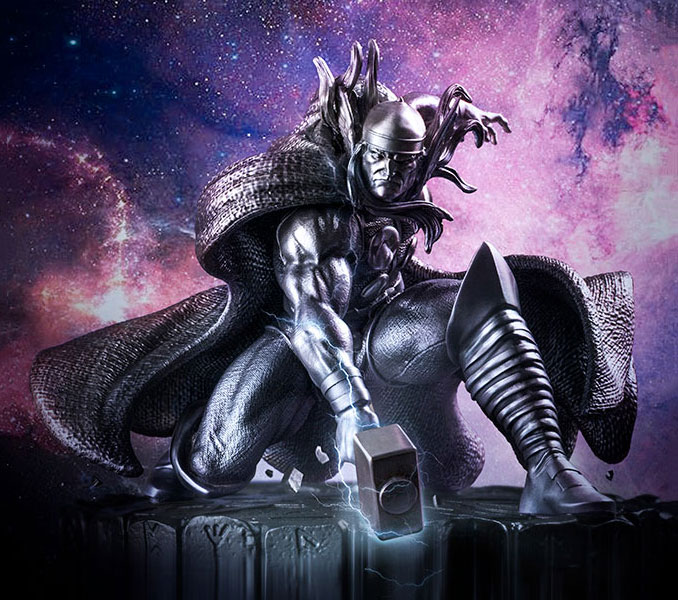 Marvel collectors that favor the God of Thunder will want to check out this amazing Limited Edition Thor God of Thunder Collectible Pewter Figurine by Royal Selangor. It looks amazing and only 2000 of them will be made worldwide.

This figure of Thor is inspired by the storyline from the 1969 Silver Surfer #4 comic book and features the God of Thunder slamming Mjölnir into the floor in an epic confrontation. It is highly detailed, superbly crafted, and an impressive sculpture that really depicts Thor’s power.

Inspired by the storyline of the 1969 comic book Silver Surfer #4, Asgard quakes as Thor slams Mjölnir into the floor in an epic confrontation. Superbly realised, every aspect of this powerful sculpture plays up the action of the battle. Thor’s iconic costume from comic books’ Silver Age is shown to dramatic effect, his swirling cape emphasizing the power with which the God of Thunder wields his hammer.

This work showcases the combined creativity of Malaysians Alan Quah and Mufizal Mokhtar, artists highly respected by the international comics and collectibles communities.

This Thor God of Thunder Pewter Figurine is $700 direct from RoyalSelangor.com. You can also find it at Sideshow.com and ShopDisney.co.uk.

Getting ready to see Thor: The Dark World for the 3rd – or 300th – time? I completely understand but you might as well dress for the occasion by wearing the Thor God of Thunder Storm T-Shirt so those around you will have one last […]

You can possess the power to make meat tender and delicious with the Marvel Thor Mjolnir Meat Tenderizer. You’ll feel like a superhero every time you beat your meat with this mallet and then feel like a god as you feast on tender steak […]

The thunder god lays the hammer down on the Thor Raging Thunder God T-Shirt. Actually, maybe ‘lays the hammer down’ is a bit of an understatement. Just look at the eye-catching image on this 100% cotton tee. Check out those wicked glowing eyes. Thor is […]

We’ve seen some incredible products based on Mjolnir, such as the Meat Tenderizer, Tool Set, and Coffee Mug. Now comes another great new one, Thor’s Hammer Mjolnir Bluetooth Speaker. Don’t worry about lifting it, it is actually quite portable as you’re deemed worthy. Like other […]