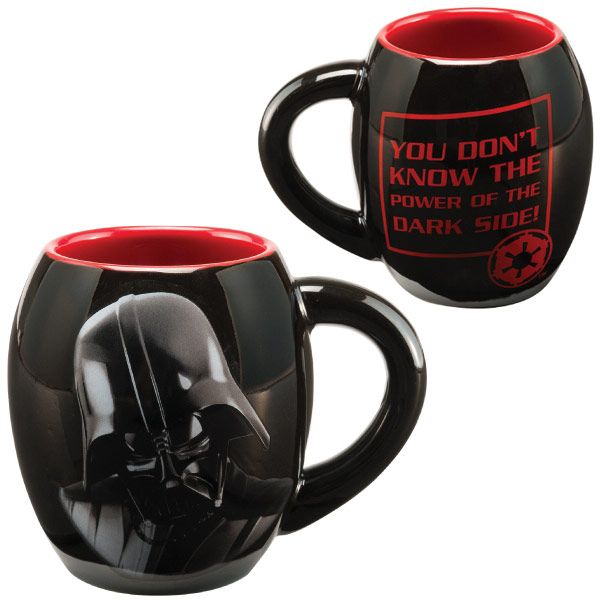 You don’t know the power of coffee? Then the Star Wars Darth Vader 18 oz. Ceramic Oval Mug probably won’t create any stirrings in the Force for you, but those that respect the awesome might of the dark nectar will enjoy the 18 ounces of caffeinated goodness, delivered by the Dark Lord of the Sith, Darth Vader.

The ceramic oval mug has a shiny black exterior that really makes the red interior and lettering stand out, which is important before you get your daily caffeine injection, because the world can be a dark place before that first cup of coffee.

The fallen Jedi formerly known as Anakin Skywalker is on one side of the mug, with the words ‘You don’t know the power of the Dark Side’ on the other, along with the Imperial seal.

Revel in the power of coffee. The Star Wars Darth Vader 18 oz. Ceramic Oval Mug will be available October 2013 but can be pre-ordered now for $11.99 at Entertainment Earth.

If you are looking for a mug that is on the large side, this Star Wars Darth Vader 18 oz Oval Ceramic Mug is the one for you. Darth Vader is sounding very threatening on this jumbo ceramic mug featuring his image and the words […]

This Star Wars Darth Vader Pinache Ceramic Mug is perfect for your morning coffee. Especially if you take it black as the dark side. It features Darth Vader’s helmet in gold under falling Imperial logos and hearts. That is a classic design. It makes a […]

I love my morning cup of coffee and probably won’t be able to last a day without downing at least two cups, but I still think the World’s Largest Coffee Cup is pretty silly. I mean, we all need coffee, but who needs that much? […]

Let Darth Vader quench your thirst with this Star Wars Darth Vader Heat Change Mug. This black mug shows Darth Vader at room temperature. When you put hot liquid in it, his lightsaber appears along with words “You Don’t Know the Power of the Dark […]