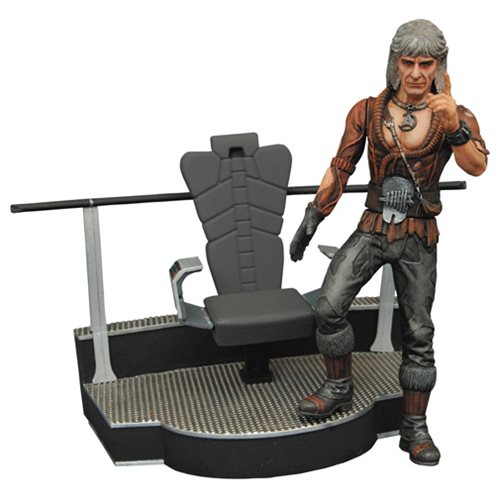 This Star Trek Select Khan Action Figure is Khan Noonien Singh as he appeared in Star Trek II: The Wrath of Khan. It measures about 7-inches tall.

Khan comes with the command chair of the U.S.S. Reliant, as well as several interchangeable parts. He comes with alternate legs, arms, hands, and a head, you can have him seated or standing, shaking his fist or crossing his arms, shouting or savoring his victory. What a great way to celebrate the film’s 35th anniversary.

Now you can relive you favorite scenes from the film. Only $21.99 from Entertainment Earth.

Star Trek II:The Wrath Of Khan is one of the best Star Trek movies, with one of the best villains. Khan. And now you can relive the movie with this Star Trek Khan Noonien Singh Masterpiece Mini-Bust. It is amazingly detailed and stands 8-inches tall. […]

Star Trek II is one of my favorite Star trek movies. If it is also your favorite, you’ll want to check out this Star Trek The Wrath of Khan Special Edition Mini Cell. It is mounted and framed so that you can proudly display it. […]

If you ever have the sudden urge to yell KHAAAAAN at the top of your lungs, you might want to do it in this communicator. The Star Trek The Wrath of Khan Communicator Replica is a very detailed reproduction of the Star Trek II: The […]

Live long and prosper. And collect cool Star Trek stuff like this Star Trek The Wrath of Khan Spock Bobble Head. It is Spock as he was dressed in Star Trek II. Captain Spock also has his fingers parted in the traditional Vulcan salute. He […]