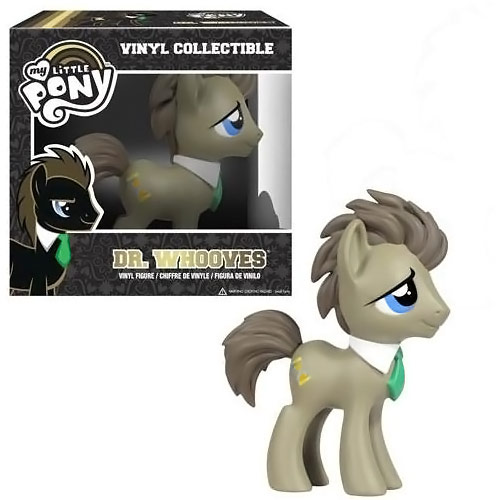 It looks like Doctor Who has invaded Pony-Land, with the My Little Pony Friendship is Magic Dr. Whooves Vinyl Figure offering what could be a look at the popular Time Lord in a four-legged form.

While Dr. Whooves isn’t officially connected to the BBC or Doctor Who, fans of the hourglass-sporting horse have taken it upon themselves to merge the two characters, with plenty of memes floating around that feature the pony with a TARDIS and sonic screwdriver. Unfortunately, possible legal ramifications with the BBC kept Hasbro from officially naming the pony Dr. Whooves, settling for Dr. Hooves instead.

Still, the connection remains, with fans even saying the Dr. resembles the tenth incarnation of Doctor Who, played by David Tennant, because of the spiky hair and tie.

Even though there’s no official connection, the timey-wimey pony has earned a place alongside other Doctor Who collectibles because the millions of My Little Pony fans can’t be wrong. If they say this is a pony version of David Tennant, I’m not going to be the one to say they’re not right.

If you want to add an equestrian twist to your Doctor Who collection, you can pre-order the My Little Pony Friendship is Magic Dr. Whooves Vinyl Figure for $13.99 at Entertainment Earth. It will be available August 2013.

It’s time to get your Bronie on with the My Little Pony Dr. Whooves Cover T-Shirt, traveling through time and space with a somewhat familiar-looking equine and an easily recognizable police call box. Dr. Whooves (also known as Time Turner and Doctor Hooves because of […]

Normally, we’re accustomed to seeing little girls fascinated with ponies, unicorns and pegasus, which may have some boys feeling a bit left out at times. Thanks to the Wonderbolts from My Little Pony, who are like the Blue Angels of the pony world, dudes have […]

Fans of Doctor Who and My Little Pony are going to love this Dr. Whooves Plush MLP Backpack. This backpack comes with a little pocket and big hugs for your back. This officially-licensed My Little Pony: Friendship is Magic backpack is super cute and super […]

The classic game of Monopoly just got a My Little Pony makeover. You will have hours of family fun with My Little Pony Monopoly. Every pony will love it. The game includes everything you need to play. Even 6 plastic collectible pony playing pieces. My […]

The Monopoly Junior My Little Pony Friendship is Magic Edition Game is a simple introduction to the classic Monopoly game. It has easy, familiar gameplay and all of your favorite My Little Pony characters. Fans of My Little Pony and kids will love this Pony […]

My Little Pony Game of Life

The game of Life just got an Equestrian makeover. The My Little Pony Game of Life game will be all kinds of fun for fans of My Little Pony. Every pony’s going to have fun playing this game. The Game includes 4 collectible plastic Pony […]

It feels good when your old, cherished cartoons come back from years of dormancy, or what you thought was banishment to oblivion. My Little Pony has made its comeback, and not just on TV but also on highly-functional accessories like this My Little Pony Muffins […]