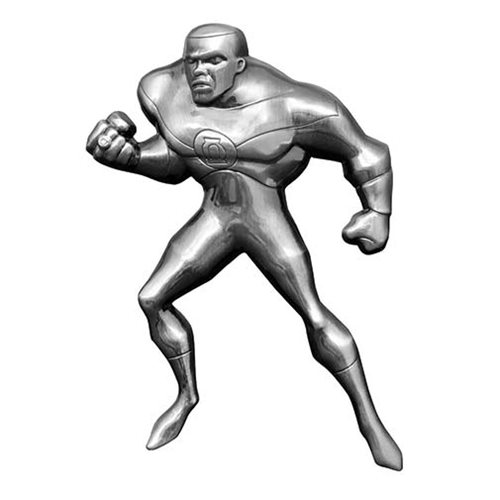 This Justice League: The Animated Series Green Lantern Figural Bottle Opener let’s you call on the power of Green Lantern’s light to get that bottle opened.

It depicts Green Lantern John Stewart as a 4-inch sculpted metal bottle opener, ready to assist in the opening of any bottled beverages. This is based on his appearance in the Justice League: The Animated Series. It has handy magnets on the back to keep it on your refrigerator. Green Lantern will want to have this in their kitchen.

Only $16.99 from Entertainment Earth. You can pre-order it now for January.

This Green Lantern Power Battery Bottle Opener makes opening your drink easy. Call on the power of Green Lantern’s light! This 4-inch sculpted metal bottle opener is shaped like Green Lantern’s power battery from the Justice League animated Series. It has magnets on the back […]

Keep this Denture Bottle Opener away from people with real dentures because they’ll probably end up with a not-so-pleasant surprise in their mouths if you don’t. It’s kind of like the Switch Pop Bottle Opener in the sense that it’s a bottle opener designed and […]

This Superman: The Animated Series Figural Metal Bottle Opener is faster than a speeding bullet when it comes to popping that top. Use the strength of the Man of Steel to remove those bottle caps and always stay refreshed. This solid metal bottle opener is […]

Fans of H.P. Lovecraft will enjoy this Cthulhu Bottle Opener. Sometimes you need a hand opening your bottle. Sometimes a tentacle or two. Or three. Cthulhu to the rescue. This novelty bottle opener is made from tough urethane resin with a solid steel bottle opener […]