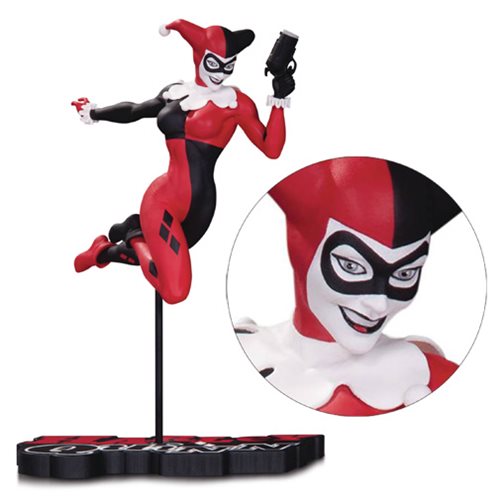 The Clown Princess of Crime takes a flying leap with the DC Comics Harley Quinn by Terry Dodson Red White and Black Statue.

Measuring 7-inches-tall, Harley Quinn, dressed in her classic harlequin outfit, leaps through the air, ready to ruin someone’s day with her overly large pistol. The themed base feature’s Harley’s name in red, white, and black to match her outfit.

The DC Comics Harley Quinn by Terry Dodson Red White and Black Statue will be available August 2017 but it can be pre-ordered now for $69.99 at Entertainment Earth.

Ready to take your inner Harley out for a ride? Vroom! Vroom! The Harley Quinn Red & Black Bangs Long Wig lets you unleash your wild side and paint the town red… and black. So you’ve got the Harley Quinn Over-The-Knee Socks, or maybe the […]

Hello nurse! The Batman Arkham Asylum Harley Quinn Red Black and White Statue will have you thinking your medical care isn’t in the greatest of hands. Sure, the woman who now calls herself Harley Quinn is a doctor but do you really want to rely […]