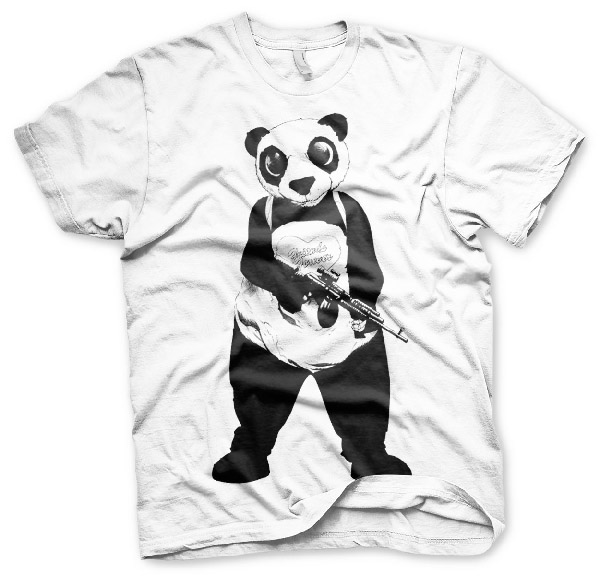 Forget about Harley Quinn because a new breakout star has been revealed on the Suicide Squad Panda Man T-Shirt.

You’ve probably seen a few Suicide Squad trailers by now. You’ve seen Harley Quinn steal a purse, Batman cling to the top of a car, and the Joker tell some poor unfortunate soul that he’s ‘gonna hurt you real good.’

But have you seen the guy (or girl) in the panda costume? If not, feast your eyes on the machine-gun-wielding furry that works for the Joker. It takes a special person to commit crimes while wearing a panda outfit, especially one with a big heart on the chest that says ‘Friends Forever,’ but this person is making it work.

Chances are pretty good that Panda Man won’t be part of Task Force X in Suicide Squad 2 so enjoy him (or her) while you can.

The Suicide Squad Panda Man T-Shirt is available for $24.99 at Merchoid.

What would the world be like without panda bears? I never want to find out. Now you can save panda bears from falling off the tire and becoming extinct in this chopstick-skills Panda Darake Balance Game. Though the instructions might come in Japanese, it doesn’t […]

So you want to unleash your inner Harley but you don’t want to show quite as much skin as Margot Robbie? No problem because the DC Comics Suicide Squad Harley Quinn Property of Joker Girls Jogging Pants have got you covered. Literally. In the new […]