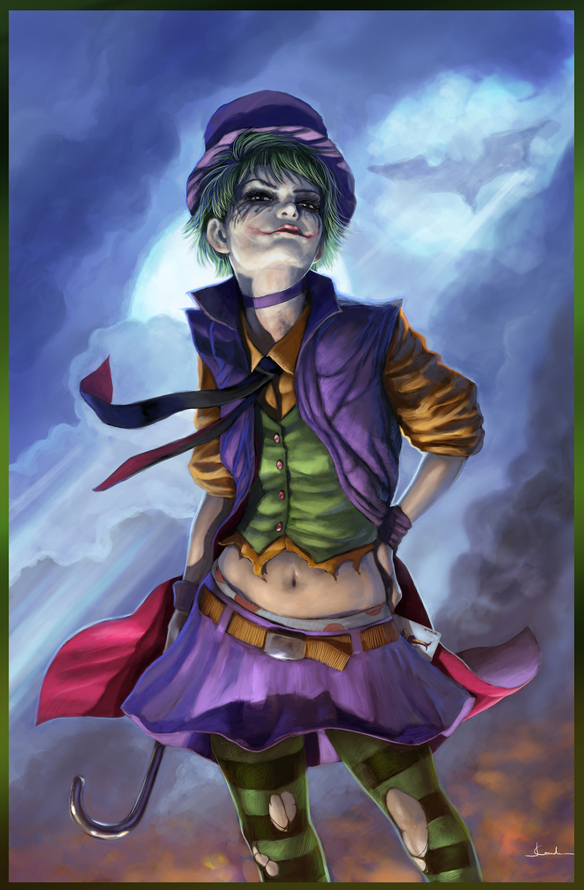 It’s always touching when the child wants to follow in the parent’s footsteps… except when the parent is the Joker and the child looks like the innocent little darling on the I’m Not Harley Quinn Art Print.

The master of makeup you see before you was once known as the Joker’s daughter, and it’s easy to see why that’s believable. However, Duela Dent has made a habit of claiming almost every guy in Batman’s Rogue Gallery as dear old dad. In a stroke of genius, DC Comics cleaned up Ms. Dent’s history with the New 52 reboot, ignoring histories that involved alternate Earths and focusing on a girl so twisted that she had the Joker’s face sewn over hers and injected some of the Joker’s blood into her veins so she could be more like dear old “dad.”

Regardless of who the clown princess is really related to, artist Jesus A Conde did a great job of capturing the madwoman’s look.

The I’m Not Harley Quinn Art Print is available on Conde’s Deviant Art page as an art print, canvas print, or photo, in a wide variety of sizes and finishes, ranging from $0.56 for a 4 x 6 photograph to $117 for a 30 x 45 canvas print.

Harley always has a blast at the carnival, especially when she has her pop-gun, like on the Harley Quinn at the Carnival Art Print. Silly Harley. She went through the Tunnel of Joker when she first met the Clown Prince of Crime, and she’s been […]

The Clown Princess of Crime is a real attention-getter with the Harley Quinn Daddy’s Lil Monster Art Print. Harley Quinn isn’t exactly a shy wallflower but she has rarely been as colorful as she is on this 18.5″ x 23″ art print by artist Olivia […]

The Harley Quinn Split Art Print offers a double dose of trouble with two different looks for the Clown Princess of Crime. Femme Fatale Harley Quinn has had her fair share of costume changes over the years, and artist Wiz Yakuza offers up an 11″ […]

Harley Quinn gets an interesting new look on the Harley Quinn Loves Beatrice Art Print. Unfortunately, Beatrice, the over-sized hammer used by Harley on several occasions, doesn’t get a whole lot of attention in this 18″ x 24″ print by artist Orlando Arocena but that’s […]

You don’t have to be playing with a full deck to enjoy the Harley Quinn Joker Card Art Print, although you might feel a little flushed after viewing it for a while. Created by artist Sepehr Afzali AKA Wargeneral723, this eye-catching 12″ x 18″ print […]

The girl who puts the pain in Puddin’ hits the books with the Harley Quinn Vintage Pop Art Print. Printed on a vintage dictionary page with an image that measures approximately 8″ x 11″, Harley Quinn, in splatter-ink style, is dressed in her iconic harlequin […]

Harley Quinn and her Puddin’ are ready to paint Gotham City red with the Harley Quinn & Him Art Print. Measuring approximately 14″ x 19″, this eye-catching print brings us Harley Quinn in her iconic red and black harlequin outfit, minus the jester cap, with […]