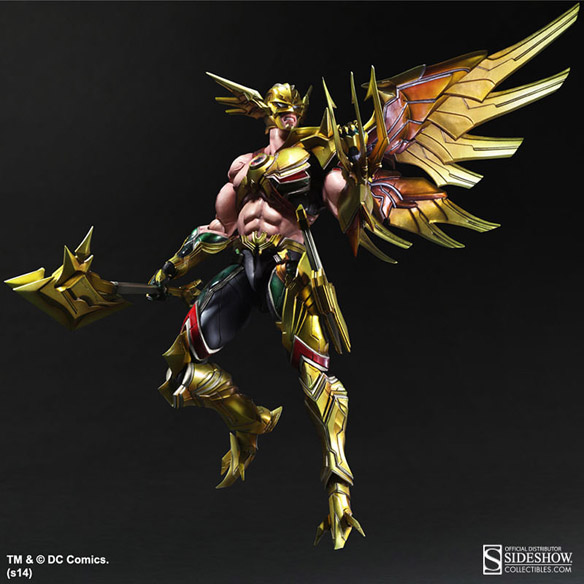 Prepare for battle and get ready to fly high with the Hawkman Square Enix Collectible Figure, which does the impossible by making a guy with the head of a hawk appear even more fierce than before.

Poor Hawkman doesn’t get a lot of love in the comic books, or maybe he’s just misunderstood. The poor guy has had more changes to his origin story than almost every other hero in the DC Universe.

Square Enix, on the other hand, knows exactly what they have to work with – a guy who can fly who also happens to be connected to the Egyptian gods, and who doesn’t mind smashing a few heads together when the situation calls for it. You can’t really go wrong with that, can you? Take note, DC.

The 11.6-inch-tall figure features a very buff Hawkman with large eye-catching wings, metallic armor, and accessories that include an Nth Metal Hammer, Axe, Kukri Knife, the Claw of Horus, and interchangeable hands. The figure also has a wide range of motion in the neck, shoulders, and ankles that allows for majestic flight poses.

The Hawkman Square Enix Collectible Figure will be available January 2015 but it can be pre-ordered now for $120 at Sideshow Collectibles.

The Dark Knight meets the Arkham Knight with the Batman Arkham Knight Square Enix Collectible Figure. Based on the Batman: Arkham Knight video game, this 11-inch-tall figure has styled himself to be an anti-Batman, wearing a Dark-Knight-style textured suit with mechanical armor, army fatigues, and […]

The Dark Knight gets an intense new look with the Batman Square Enix Collectible Figure, and the bad guys better leave Gotham City right now. Artist Tetsuya Nomura created a new eye-catching design for Batman, making the vigilante look even more intimidating than before. In […]

The Spider-Man Variant Square Enix Figure can do everything a Spider-Man can… and that’s pretty impressive. Okay, this Spidey can’t swing through a neighborhood, flirt with Gwen Stacy, or hurl insults at Jonah Jameson but it is articulated enough to get into many of Spider-Man’s […]

The Mo-Tool Wood Inlay Axe is a multi-tool with some serious power. This manly tool packs in an axe, a hammer, knives and that’s not all. It has almost every tool that you might need. All packed in a handcrafted red oak handle, with a […]

When the zombies come you are going to want a weapon that will carry you through. This handy weapon is balanced and gripped for comfort and control and will look great with zombie brains on it. The forged steel head keeps its edge which is […]

Do you have a lifeless wall that needs some color? Add depth, dimension and loads of color while designing your own configuration of squares when you have Square Root Wall Art. Add, subtract, multiply. Interactive art installation color blocks countless configurations in pollen, white, sprout, lobster, swoon, buzz, fog on DIY […]