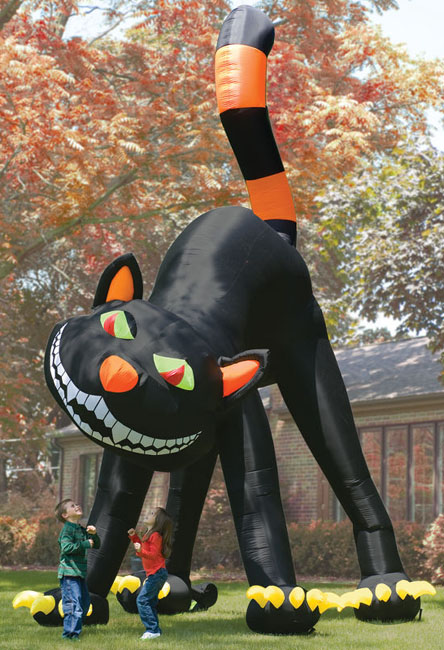 Halloween is still a month away, but that doesn’t mean you can’t start preparing for it. If you’ve got kids, then you know that the time to look for Halloween costumes is now before the rental shops start to run out. And when it comes to the decoration, then you might want to look into the Two Story Inflatable Black Cat–if you’ve got a lot of money to spare that is.

The Two Story Inflatable Black Cat costs a couple of hundred dollars but if you’re throwing a huge spooky Halloween bash, then really, this will do wonders at setting the mood for the night. And aside from that, I’m sure a lot of kids will go bananas once they see this humongous black cat. To make your party even creepier, make sure to throw in a few Giant Gummi Brains and Giant Gummi Hearts.

Standing nearly two stories tall, this inflatable black cat is the largest Halloween decoration available. The cat’s underbelly is 9 1/3′ above ground at the highest point, allowing trick-or-treaters to walk underneath, and each paw is the size of an armchair. The cat’s head automatically sways side-to-side and it has illuminated, piercing red eyes, a 4 3/4′-wide fanged grin, and 9 3/4″-long claws.

The gargantuan feline’s hindquarters and tail are elevated above its head as if he’s about to pounce on unsuspecting prey. An integrated air pump inflates the display in four minutes, and lights in the neck, body, and tail produce an eerie glow.

The Two Story Inflatable Black Cat is available exclusively from Hammacher Schlemmer for $299.95.

Sadly all good things must come to an end, summer, Lost, Firefly, the World, etc. But when they do, they usually make way for something else that is pretty cool…In this case, summer is giving way to fall and Halloween. You probably remember the Two […]

Sugar and spice, it’s tough combination to get right and many people fear trying it. But if you have a thing for the gummi candies and habanero chillies, and just stuffing your face with the Techno Gummi Bears followed by a 100,000 Scovilles Hot Naga […]

Some people may look at this massive Two Story Inflatable Grinch as a way to top off their huge assortment of Christmas lights and holiday decorations. I look at it as a stand-alone item—a replacement for almost all those other lights and decorations. It allows […]

How are your Christmas decorations looking the year? If they’re less than impressive, you need to add this Enormous Inflatable Rudolph the Red-Nosed Reindeer. Standing a massive 15 feet tall, with an LED illuminated nose, this inflatable Rudolph will be the envy of your neighbors. […]