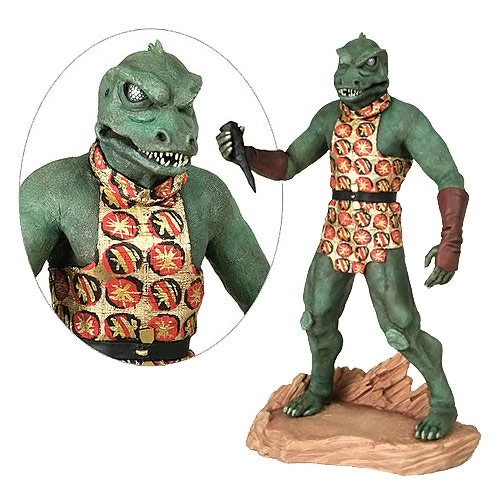 Captain James T. Kirk had his fair share of altercations during his five-year mission on the Enterprise and the Star Trek Original Series Gorn 1:6 Scale Statue captures a perfect likeness of one if his more memorable adversaries.

You wouldn’t think a giant lizard-man in a gaudy toga-like outfit would have a lot of staying power, even with die-hard Trekkers, but the Gorn’s endurance in the real world has proven to be just as tough as Kirk’s opponent in the Arena episode of the original Star Trek series. The creature even (sort of) had a rematch with William Shatner in a television promo for the Star Trek video game.

This particular Gorn is made of heavyweight polystone, hand-painted, and stands 13-inches tall, with only 500 pieces being made.

These Star Trek: The Original Series Geeki Tikis will liven up the party. They are a great way to mix tropical with Trek. You get a set of 6: Captain Kirk, Dr. McCoy, a Gorn, a Klingon, Mr. Spock, and a scary Mugato. It is […]