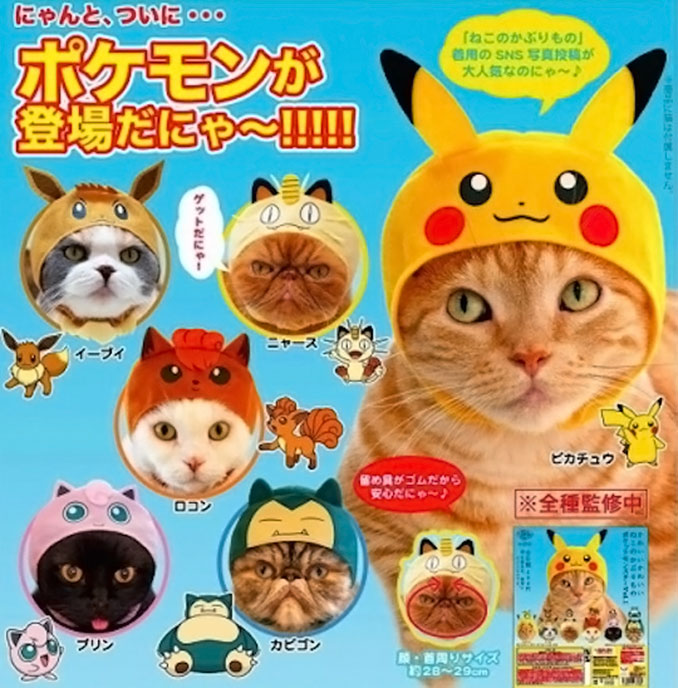 Your kitty wants in on the dress up fun, and there’s nothing cuter than these Pokemon Cat Cosplay Hats straight out of Japan. Your cat can role play as Pikachu, and when they get bored of that they can move on to any of 5 additional hats: Meowth (of course), Eevee, Vulpix, Jigglypuff, or Snorlax.

Yep, your cat can have this set of 6 Pokemon hats to dress in whatever suits his or her mood. Unless he or she is in the mood to not be bothered. In that case, they’re in for a bit of torture as you force them into a few hats for some pictures.

The Pokemon Cat Cosplay Hats are as unique and awesome as they sound. Combining one of the biggest game and anime franchises in Japan with the native love for all things feline, the hats allow you to transform your pet cat into a Pokemon character. The headwear items are available in a set of all six pieces in the series. Naturally the set includes Pikachu, but there’s also Eevee, Meowth (known as Nyasu in Japan), Vulpix (Rokon in Japan), Jigglypuff (Purin in Japan), and Snorlax (Kabigon in Japan).

This set of 6 Pokemon Cat Hats is available for JPY 5,608 ($52) at Japan Trend Shop. Shipping from Japan to the US for this item is a surprisingly reasonable $20.

This Pokemon Snorlax Kigurumi is perfect for fun cosplay, lounging around the house, or as comfy pajamas. As you probably know, Kigurumi is the combination of the Japanese words kiru (to wear) and nuigurumi (stuffed toy), so it is literally a plush toy you wear. […]

This Pokémon Snorlax Bean Bag Chair looks just like your favorite large Pokemon, Snorlax. This guy is the perfect place to relax after a long day of playing Pokemon Go. The chair is almost 4 feet tall and over 2 feet wide. Lay back into […]

This Pokemon Eevee Brown Embossed Wallet is the wallet that Pokemon fans have been waiting for. It is all about Eevee. It features embossed details of the adorable rabbit-eared feline-like Pokemon before its evolution. The wallet measures about 8-inches long x 4-inches tall. It is […]