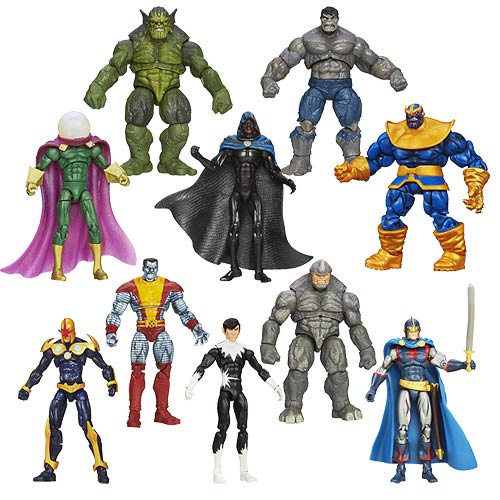 B-list comic book heroes deserve love, too, which is why I like Marvel Universe 2013 Action Figures Wave 6 so much, although there are a few recognizable faces included too, just to sweeten the deal.

Even people who never touch comic books are familiar with characters like Iron Man, Thor, and the Hulk, but the Marvel Universe is jam-packed with all kinds of heroes and villains. Wave 6 gives a shout-out to a few of these lesser-known types that desperately want to break free from the shadows and play with the big boys.

Although his skin is a different color from his big screen incarnation, the Hulk is pretty hard to miss. He’d be recognizable even if he were purple and wearing pink polka-dotted pants. However, figures like Nova, Mysterio, Cloak, and the Black Knight require a little more dedication to the world of comics for their identities to be known.

These 3 3/4-inch scale toys have a price that defies their tiny size but they’re designed with plenty of detail and pack plenty of articulation, making it easy to create your own unique battle scenes.

Marvel Universe 2013 Action Figures Wave 6 won’t be available until March 2014 but they can be pre-ordered now for $129.99 at Entertainment Earth.

Three Spiders and a symbiote make up the Spider Man 4-Inch Metals Die-Cast Action Figure Wave 1 Case. Get ready for all the web-slinging action you can handle with a case that contains four individually packaged, 4-inch-tall figures that may contain the lineup of – […]