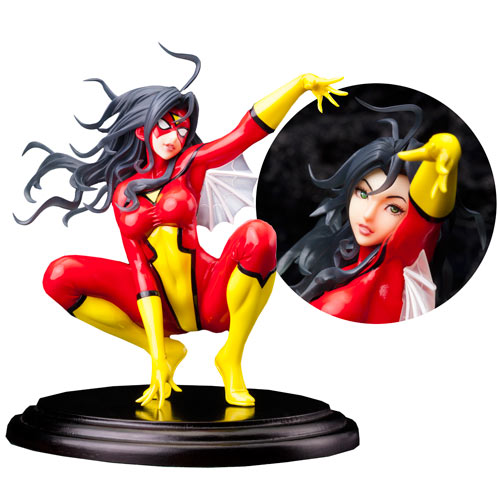 The original female wall-crawler, Jessica Drew, is back in action with the Marvel Spider-Woman Bishoujo Statue, offering a stylized anime/manga version of the Marvel Comics’ character.

I always had a soft spot for Spider-Woman because I liked the fact that she was more than just a female version of Peter Parker, which seemed to be the way of creating female superheroes for a while. Instead, Jessica had an origin, costume, and powers that were nothing like Spider-Man’s, which could’ve been a problem in the long run since the character was soon killed off in her original comic series.

The statue, which is just a little over 5-inches tall, features Spider-Woman in her familiar crouch, with her hair blowing in the wind. An optional face is included so that you can also have an unmasked version of the arachnid hero.

The Marvel Spider-Woman Bishoujo Statue will be available June 2014 but it can be pre-ordered now for $64.99 at Entertainment Earth. It will also be available at Amazon.com for $64.99.