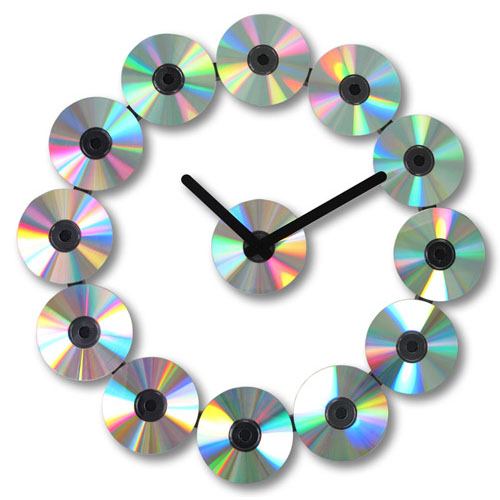 The world of music has moved on, with digital media now holding most of our tunes, but the CD Wall Clock shows that there’s still place for the once-revolutionary CD, and it’s on our wall.

The true way to honor the humble CD these days is to assemble a bunch of them together and stick them on the wall so they can tell you the time. Let’s face it. A bundle of MP3 players or iPods wouldn’t look nearly as cool.

The really great feature of this clock is that you can customize it with your own CD’s, even switching them out for… whatever reason you might want to switch them out.

This small cube comes with both a built-in MP3 player and FM radio, giving you all possible options to you choose exactly what you want to wake up to.

Where watches and wall clocks used to be made in humdrum, plain old boring designs, things are starting to get more interesting. Utilitarian designs are in, so it’s not surprising to see clocks stripped down to their core and featuring designs that are oh-so-bear yet […]

Does your clock have a face? Well, if you have the Kit-Cat Clock hanging on your wall, then it does. But if you’ve got the Mustache Wall Clock instead, then all you’ve got is a clock with no face, just a mustache. The Mustache Wall […]