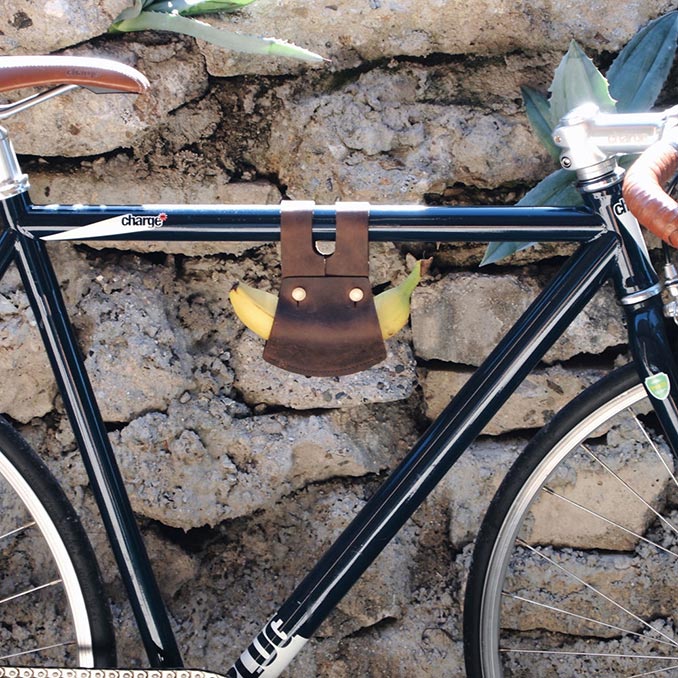 Sometimes you’re just in the mood to have a banana, but what if your only mode of transportation is a bicycle. Have you ever tried eating a banana on a bicycle? Okay, honestly it’s not that hard, but the Banana Holder provides a way to hold the banana for later, just in case you don’t want it now but might be in the mood for one later.

Will you be spraining your wrist with the blinding speed used to whip out your credit card, visions of hands-free banana-toting floating through your brain? Probably not, especially at the listed price, but there are some positive points to keep in mind.

First, the holder is made of genuine leather, and that can be considered a good thing, unless you’re anti-leather because of cows.

And the Holder is versatile, too. In addition to being able to transport your banana on the crossbar of your bicycle, you can also put the holder on the handlebars or under the seat, or skip the bike completely and carry the banana on your belt, strapped to your hip like a bright yellow six-shooter… only not as cool-looking.

Third…uhhhh… it’s designed to fit a regular banana, so you don’t have to worry about this valuable source of potassium slipping away from you.

This is a banana holder made of genuine leather. It is designed to allow riders to safely carry and easily access a banana. You can hang the banana holder on a bike frame as well as your waist belt.

Is the world ready for a Banana Holder? Are you? If so, you can get it for $55 at Biken’s Etsy store.