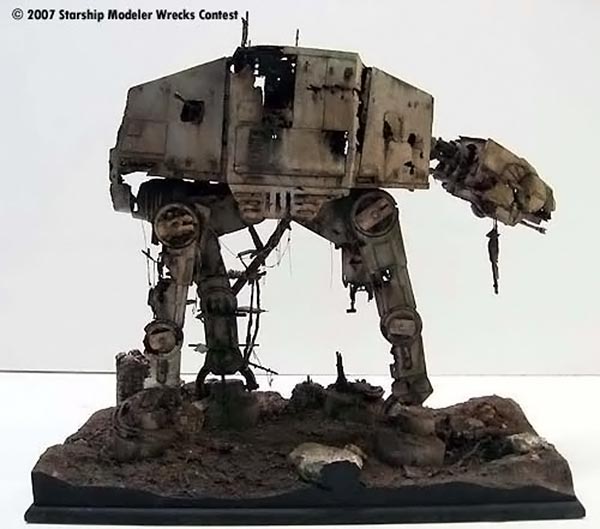 The 1/32 scale AT-AT was created by scratch modeler Dimitri Kaliviotis. (Update: Link removed because the website is gone.)

This entry is a heavily modified ATATRON kit. The ATATRON kit is a garage kit which is not commercially available but a few models have been made over the years. I managed to get hold of one because I was commissioned to put some finishing touches on the prototype model and to make the molds for it, so later I was given one of the castings as a “bonus gift”. However the ATATRON I got was one containing mostly reject cast pieces. So Instead of repairing the reject/miscasts I decided to use those imperfections in my favor.

Pancakes are delicious as they are, but if you could make the pancakes of your wildest dreams would they be in the form of epic Star Wars characters and space vehicles? At Williams-Sonoma, you can get a set of Star Wars Heroes & Villains Pancake Molds […]

Fans of pocket knives can now make their own with this handy DIY Pocket Knife Model Kit. Put together your own lockback knife, and while you are making it, you will learn how this simple mechanism works. You can choose from several different colors and […]

Everybody loves a good dragon. And this is one of the greatest movie dragons ever to grace the screen. ThisDragonslayer Vermithrax Dragon Preassembled Model Kit features the frightening Vermithrax dragon. Most fans know that it is from the cult-classic 1981 movie Dragonslayer. It’s easy to […]